Featuring a Uizard member: Zavosh Zaboliyan, an innovator, tech visionary, mentor, and investor for over a decade 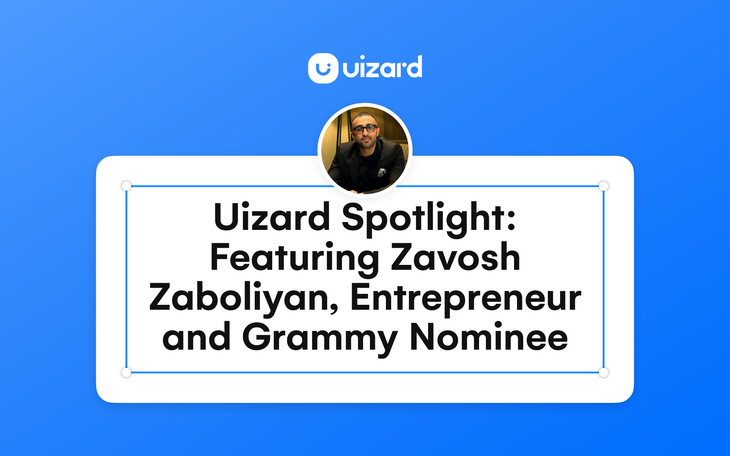 This series profiles the most important part of Uizard, our community. Today’s featured interview is with Zavosh Zaboliyan, a community member who has over a decade of experience in business, product management, strategic marketing, and management consulting.

Zavosh is most passionate about sustainability and inclusivity; throughout his career, he's identified highly successful technology trends and startups ahead of their time. Check out our interview with Zavosh here:

Hi Zavosh! I'm excited to be sitting with you here today. You have a very impressive profile, and you're doing a lot of things. I'm super interested, what's keeping you busy these days?

I've been doing a lot of consulting during the pandemic. Prior to that, I've been working with some venture capital companies and working with the startup community in general. Since the pandemic, a lot of that stuff slowed down, so I started to actually look into positioning myself for the next few years.

I strongly believe in anything that will translate to benefiting web3. I've been exploring different ways, and there's been a lot of interesting talks. I've been talking to great founders, from the CEO of Opensea to people like Mark Cuban, picking his brain on starting an accelerator for web3.

Aside from that, I'm just kind of really focusing on where those gaps are. That's where it excites me — at the very early stages and then being able to see that transition into something valuable for the masses to be able to use. There's a process to it. It's design thinking, plus some research development, plus market analysis, and then it brings you close to where you find the right opportunities. That's what's keeping me busy right now.

Thanks for sharing. I love that, and for sure, we can really learn a lot from you. Now that you're in here, and having gone through the journey that you have, what do you wish you had known before taking your first leadership role?

I started about 15 years back. I was passionate about entrepreneurship. When I was very young, I used to read a lot of books. And I didn't know until later, but I was drawn to the inventors of the past generation, like Thomas Edison, and, you know, people who have created the world for us today. It was fascinating to me growing up how somebody could do that — create something from scratch. Later on, I realized, wow. That's what we now call entrepreneurs, but they've been around for centuries. These are people that solve our biggest problems on the planet.

If I had to go back to my younger self, I'd tell him that if you can learn, adapt quickly, and keep going, you'll be fine. It's better to have a growth mindset than a fixed mindset. As an entrepreneur, it's okay to make certain mistakes, that's part of it. The important thing is to recognize them and think about how you could do things differently and better moving forward. This is something we can learn from the great inventors of the past generations.

That gives me a perfect segue to my next question. As a serial entrepreneur, you must have had your fair share of failures. How do you learn from failures? And how do you overcome setbacks?

I love this type of question or topic. A lot of people shy away from talking about these things, but the most successful companies always embrace failure. That's an honest way of analyzing data. The best way to look at it is a baby learning how to walk, and then they fall down. When they fall down, they don't think, "I guess this isn't for me. I can't walk." They keep going and going, and eventually, they just walk and don't fall back.

As we grow older, we forget that as kids, when you fall down, you're just playing a sport, it's not looked at as a failure. It's just part of the experience. Then, as we become older, the schooling system and all that stuff create a rigid social infrastructure.

The best way to look at it is, that it's like a game. It's literally a game, the economic game. It's no different than, you know, children playing their games. So if it's your career or if it's your startup, don't let it affect you as much because it's an expected part of the game.

That makes complete sense. If you come in there ready for what you're going to get, then you don't beat yourself up and instead, charge everything to experience. I love that.

Apart from failure, another thing that we hear a lot from the founders in the community is risk. Risk, again, is such a big part of finding your way to success. We're interested to know, how do you go about approaching risk?

Growing up, I had a much larger appetite for risk-taking, and I would do a lot of things. Sometimes, they would pay off in a fantastic way.  I was able to make a judgment call or based on intuition, take a massive risk on something. That's not my approach anymore. Doing that so many times, I've learned to figure out what works best for me and apply strategy, apply data. So now I'm a proponent of making informed decisions and informed risk-taking.

If you don't take risks at all, or if you reduce your risks to the absolute lowest — for example, in banking — banks don't take risks. They want proof before giving you a loan, right? So their risk appetite is so low because they don't want to fail by just spreading their funds across so many people.

In the entrepreneurial sense, in the startup sense, if you don't take risks, you won't move forward, and you won't be pushing the needle at all. So looking at founders in our timeline, the biggest ones are the ones that took the biggest risks. If you look at a cliché example, look at Elon Musk. Everybody knows, that he had to take a massive risk on his investments in his funds, being ridiculed by every media outlet until tides shifted, and people's mentality shifted, and then he happened to be at the forefront of the shift. He benefited the most from risk. This is proof that as long as you're making an informed decision around risk, the rewards would be amazing.

This applies to startups: companies are coming up in terms of trends. Some of those trends are popular, so they're centered. Now when you move away from this center point to the left, that's where things are weirder and newer. For music, that is not what people would enjoy on the radio and not what everybody would listen to; the more you go left, the more you're missing the mark. Less people will like it, it's maybe a smaller community that enjoys that type of content. When you go right, we refer to it as being saturated. That's been overdone so many million times. The more you go to the right, the more it's like, "Oh, I heard this five years ago. This is no longer center."

So if you have a compass that's making sense of this like a GPS system, you can easily filter out what a company is working on. Let's say, quantum computing. I love it. It's exciting, but it's at least five years or so from now; it's not within reach of the masses. Now, if somebody is working on, let's say, an NFT company, guess what? Right now that's like, just right off-center, so just left of center, so it's within reach. But if you align yourself time-wise, you may get it right in like, two years from now, or a year from now, when everybody else had just started to get going.

That's so well-put. Now we have a lot of other founders and leaders in the community who are asking for action points and pieces of actionable advice. So if you were to give, again, let's say three pieces of advice to these people who are much early on in their journey, what would these be?

My first advice is to understand the game you're playing. Let me give a clear example. Most founders, even today, don't understand the difference between a company and a startup. What's the difference between any business and a startup? One of the major differences is growth. In a traditional business, maybe by the end of the year, you make $300,000. Maybe the year after, you make $350,000. Maybe the year after that, you make $320,000. Okay, so it's like a business that makes $300,000.

Then you have a startup that starts today, and maybe the next two weeks, it makes no money. Two weeks after,  they make $20. Two weeks after, they make $40. Then, they make $80 the following week. These are very small numbers, but who would you want to be a part of as an investor? So this startup is showing 100% growth, which is why this is massive.

This is the type of strategy I learned from accessing some of the training from Y Combinator. And so the first thing is to really understand the game you're playing because you can't get into business and build a salon and believe it's the next AirBnB.

The second piece of advice is to consider the economic factors. I come from impact, and I've done companies where I've spent more money, trying to give a product for free, and wasted time and energy because I believed that the impact was worth it. Only a few people will actually say it like it is: if you want to become a successful founder, it's going to come down to the dollars and cents. So you have to present everything economically — so that this business will make money.

The third thing is, you got to learn how to delegate — delegate the job to other people. Find out the gaps in your skill set, delegate the work, bring other people, and enable them to do what they're good at. If I'm not good at finance, or if I'm not good at sales, then I better find the best salesperson I can find if I can afford to pay them a salary. If I can't, then I better give them a big portion of the pie through equity.

Thanks, Zavosh! As closing, could you tell us a bit about how you learned about Uizard and what you think of the platform so far?

One of the first things in any new project or startup comes down to having the wireframes. You got to have the prototype. I got sick and tired of having to deal with developers and programmers; we waste so much trying to build something and raise money for it and things like that.

So I started looking at no-code and no-design tools. And that's when I discovered Uizard, and I've had a great time with the platform so far.

That's great to hear, Zavosh! On behalf of the Uizard community, thank you so much for this chat. We really appreciate you.

Uizard vs Canva: The similarities and key differences

Uizard vs Balsamiq... A Balsamiq alternative