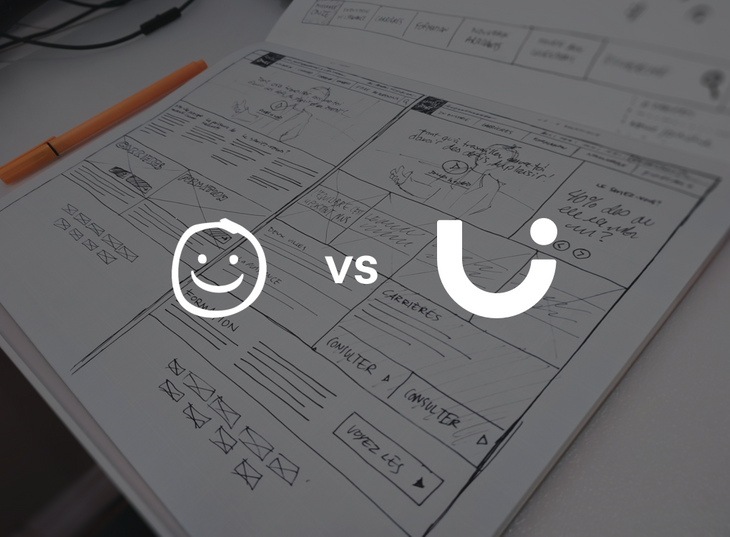 Balsamiq has long been the tool of choice for wireframing software, but is it time for a new, magical competitor to take the crown? Like Balsamiq, Uizard has been recognized for its ease of use and unparalleled low barrier of entry. But how do these tools compare, and does Uizard make a great Balsamiq alternative?

Join us as we take a detailed look at Uizard as an alternative to Balsamiq, assessing the strengths, weaknesses, and use cases of each tool. Want to check Uizard out for yourself? You can sign up to the magical, rapid prototyping revolution with the link below. All done? Let's take a look at why Uizard might just be the perfect Balsamiq alternative for your project.

Uizard vs. Balsamiq: The similarities

Uizard vs. Balsamiq: The key differences

Verdict: Design apps, prototypes, & UI systems with the power of AI with Uizard

Try Uizard as a Balsamiq alternative for free

Uizard vs. Balsamiq: The similarities

Even though Uizard and Balsamiq each have a lot of distinct features, at their core, the two tools share a lot of the same offering.

They are both easy to use

Uizard and Balsamiq are known to be much easier to use than alternatives.

Users of the two tools often acknowledge that they've spent little to no time training themselves on how to use the tool, and that makes sense. After all, both tools are reminiscent of the interface of Keynote, Powerpoint, or even Canva, where the user simply has to drag, drop, and arrange — that's it.

Because of their unprecedented ease of use and no-tutorial-needed characteristics, Uizard and Balsamiq are very appealing to non-designers. Both tools are used by a wide range of non-designer roles in the software industry, such as founders and entrepreneurs, business analysts, product managers, developers, and more.

Uizard and Balsamiq enable and empower these groups to communicate their ideas visually without having to spend time learning a new tool, as is the premise in traditional design software.

They both enable fast iteration

Both companies are advocates of rapid prototyping and failing faster — essentially exploring as many ideas as possible as quickly as possible to discover the best solutions.

Fast iteration is made feasible because both tools are so easy to use, with very little noise. Unlike traditional design software, creators don't get too attached to initial design ideas because Uizard and Balsamiq prototypes are easy to create and less labor-intensive.

They both help users save resources

Uizard and Balsamiq are immensely resource-saving.

Because the two tools have a very low learning curve, teams spend less time and money to onboard different professionals. As such, teams can spend their time and effort in more productive ways.

Additionally, since both tools are focused on throwaway and rapid prototyping, they enable teams to quickly and affordably create simple prototypes to gather feedback on, before spending more time and effort on more complex, labor-intensive designs.

They both embody "less is more"

Unlike most prototyping and design software, Uizard and Balsamiq embody the "less is more" principle in prototyping.

The two tools are consciously made without too many bells and whistles in order to enable the user to focus on content and structure rather than all the nitty-gritty details — which can be a distraction early in the process.

Balsamiq claims to enable people to communicate concepts "as devoid of design elements as possible. In the same way, in this blog article on Uizard vs Figma, it's mentioned that Uizard enables one "not to get lost in the (design) details."

Uizard vs. Balsamiq: The key differences

Now to the fun stuff! Although there seem to be a lot of similarities between Uizard and Balsamiq, at the end of the day, these tools are not the same, and Uizard provides loads that might just make it the balsamiq alternative you've been looking for...

There are many benefits to creating low-fidelity wireframes, but one that stands out is that stakeholders don't get too tied to a specific design, but instead give feedback based on the bigger picture, i.e. content and architecture.

Uizard and Balsamiq both have characteristic advocacy for low-fidelity wireframes.

However, the two tools have a slightly different approach.

In Uizard, you can both create wireframe directly in the tool, but you can also still sketch ideas on paper and import them into Uizard for further edit.

Uizard acknowledges the market's significant preference for paper prototyping, and this is evident in its feature to convert wireframe sketches from paper prototyping, on top of its built-in low-fidelity wireframing feature. Additionally, you can even upload your Balsamiq wireframes to Uizard and use its AI features to continue your work.

Essentially, the train of thought around working in Balsamiq is iterating enough until you have the content and architecture you want, then recreating it in a design tool to imagine how this would play out in an actual design, reflecting typographies, spacing, and colors, among other things.

In Uizard, there's no need to recreate your wireframes from scratch to convert them into high-fidelity. Rather, the AI does the hard work, so all you have to do is create a theme (either manually or automatically), then click a button to convert a low-fidelity prototype to a high-fidelity one.

In addition, you're also able to switch among different themes instantly.

Verdict: Design apps, prototypes, and UI systems with the power of AI with Uizard

Uizard and Balsamiq are both effective tools, usually chosen for their low barriers of entry. The two tools promote faster iteration, rapid prototyping, and democratization of design by empowering non-designers to express their design ideas visually.

Essentially, Uizard enables one to do everything Balsamiq can — and more, making it a truly great choice if you are looking for an alternative to Balsamiq that also offers a free subscription option. Balsamiq is a digital pen-and-paper alternative. Uizard, on top of offering the exact same feature,  also enables instant switching between low-fidelity wireframe and high-fidelity design, instant switching between different design themes, generation of high-fidelity themes from any source, and high-fidelity prototyping, among many other features.

Try Uizard as a Balsamiq alternative for free

Want to transform the way you design digital products and webpages? Uizard is a full spectrum design solution designed to make the wireframing and prototyping process easier than ever before. Design apps, web pages, and UI systems at lightning speed or fast track your design flow with our pre-made design templates.

The best part? Uizard is completely free, meaning you can unlock the magic of AI-powered design in just a few clicks. Join the magical revolution with Uizard today and transform the way you ideate and iterate.

Ready to bring your own digital product design ideas to life? Try Uizard for free now and join the magical prototyping revolution. Want to learn more about all things design? Check out the Uizard blog now.