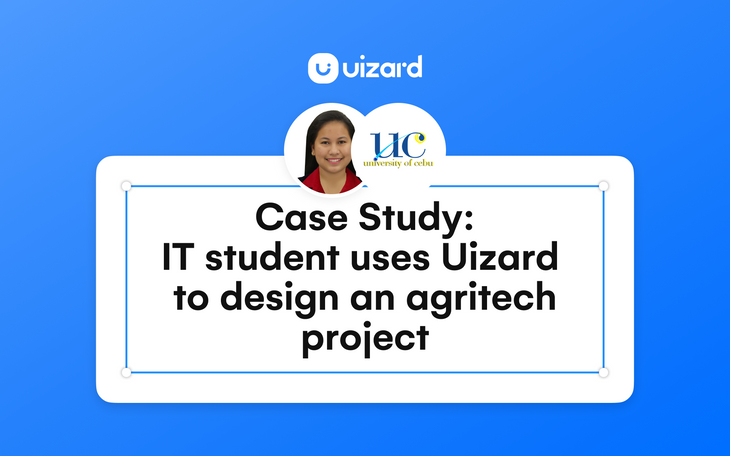 Hailing from the Philippines, Gayle Dela Torre is a third-year Bachelor of Science in Information Technology (BSIT) student at University of Cebu - Banilad. Before starting university, she was a layout artist. Among many things, she's most passionate about entrepreneurship, tech, designing, and making a positive impact in society.

In Gayle's entrepreneurship course for her IT degree, her class was tasked to pitch a startup idea with a software solution. As a response to the pandemic, Gayle and her group decided to design a mobile e-commerce platform for farmers – a solution within the agritech field.

We decided to make a mobile application for farmers. It was an e-commerce platform for farmers' needs; there was a need for it in the Philippines, considering the logistical problems caused by the pandemic. One of our tasks was to create a user interface, as well as the user flow.

Gayle and her group started designing their application in Figma.

My groupmate sent me the link to Figma; we tried it, but it's more technical, more difficult to maneuver.

That's when someone recommended Uizard, which won them over and became the tool where they pursued their agritech project.

For me, Uizard was a winner because it was easy to maneuver. I am proficient in Photoshop, but, in my opinion, the other tools such as Figma are harder than Photoshop, and Uizard was significantly easier. It's a very comfy tool to use.

Uizard's most useful feature for Gayle and her group was the drag and drop - here's what she had to say about it:

We really enjoyed Uizard's drag and drop feature. The icons, the buttons, the stock photos – everything we needed for our prototype was already there. We just needed to design and make them all come together through drag and drop.

It took Gayle and her group only 12 hours to design their agritech application:

Gayle and her group aced their project and got the highest grade!

Without Uizard, it would have been really hard for us. I was the assigned designer, so the pressure was on me. I wouldn't have been able to come up with anything good. Also, it was a class project, so we didn't have the luxury of time. The project was really only possible with Uizard.

And that's not all - their project is actually going to be developed as a solution for Filipino farmers.

We asked Gayle if she had any tips for other students who are considering to use Uizard for their class project. Her advice?

Use Uizard. It's just easy. You can re-create a design inspiration and make it your own in no time. Just explore the Uizard platform, and you'll be surprised with what it can do for you.

Have a an app or website project for school or university but don't know where to start? Create a free account in Uizard, and just let the ideas flow!